James Taylor ought to be one of the first musicians that come to mind when you think of the great folk guitarists. His music is meditative, calming, and enjoyable to listen to because of his light, airy sound.

Like any guitarist, Taylor relies on his preferred guitars for the perfect tone. James Taylor uses a wide variety of predominantly steel string acoustic guitars to get this sound. As his music changed over time, he switched between several instruments.

James played with several guitarists such as Paul McCartney, Jim Olson, Lou Reed, Carole King, and Bob Dylan. His guitars have the most iconic sound, along with a velvety tone. 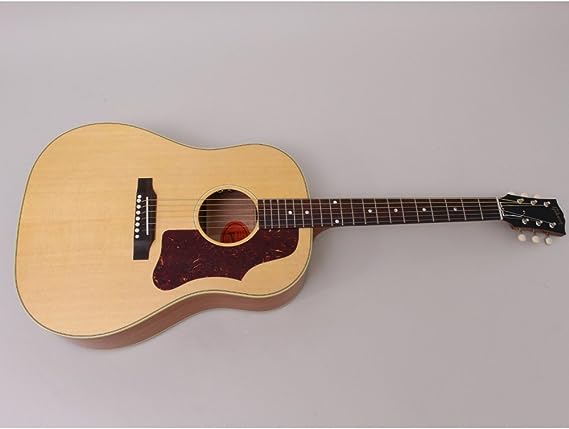 His early music is played on a Gibson J-50, which was his very first instrument. Although he also utilizes instruments from Yamaha, Olson, Martin, and Epiphone, it’s this Gibson that best accentuates his sound.

Online authorities concur that James Taylor’s first guitar was a Gibson J-50. The musician was very drawn to this when it was released in 1947 and remained devoted to its qualities.

James Taylor might have liked this one since it has a natural finish and a recognizable sound that is unique to this model but that you can’t really pin down. This might be the one to choose if you want a beautiful, clear, and crisp tone to match James Taylor’s musical style.

This was the James Taylor Signature model guitar that he played with many guitarists. Another fascinating fact about this one is that James Taylor just uses his thumb and fingernails when using it.

This configuration gives the guitar a bright, clear tone with hardwood in the back and softwood in the front. Because of the popularity of the J-45 line of guitars, spruce has mostly become a standard in contemporary acoustic guitars.

The rosewood fretboard is on a solid mahogany neck with a slim taper. The hardwood enhances the thinner neck and brighter tones of the strings, which also gives them a slight extra twang.

The neck’s design is perfect for a steel-string acoustic guitar because it allows players to finger considerably more complex chords than they could with a neck that was thicker. The J-50’s body and neck are perfect.

Other Guitars Played By James Taylor

The J-50 was merely one of James Taylor’s guitars, of course. Over the years, as his approach and sound changed, he performed dozens of times. While some of these instruments were only used for live performances, the majority of them were used in his recordings, contributing to his distinctive style.

The legendary Jimmy Page and Hank Williams are other fans of the Martin D-28 in addition to James Taylor. Among the many things, Taylor would have liked about this one is its back body made of Indian Rosewood. As a result, whenever Taylor uses this, he always gets that distinctive twang.

Another factor in why Taylor made this guitar a mainstay of his acoustic career may be the thin mahogany material that makes up its neck in combination with the dreadnaught body.

The Martin D-28 guitar is among the most well-known acoustics in existence. Martin is noted for its acoustic guitars. Most of us have heard Jimmy Page, Hank Williams, and James Taylor perform it.

The sides and back are made of Indian Rosewood, giving it a characteristic twang, while the front is also spruce. Apart from that, this guitar is constructed similarly to the Gibson J-50, with a regular dreadnaught body and a slim mahogany neck.

James Taylor presumably chose this Epiphone Sorrento since it was a 50th Anniversary edition, which is why he chose it. It is a classic item, and its flawlessly laminated maple top and body further contribute to its popularity with him. This guitar helped him during British Rock Invasion with its unique sound.

The binding technique on this one is likewise as historically accurate as it can be. The original tailpiece, which is regarded as a classic design in the acoustic world, is included with its rosewood bridge base. The Sorrento’s limited production run of 1962 pieces is another intriguing feature.

One can only hope James Taylor didn’t purchase every single item. Additionally, this comes with a “1962 Collection Certificate of Authenticity,” which is an actual certification from the maker.

Despite the fact that it utterly defies everything that is James Taylor’s aesthetic, he has been spotted using it. The instrument’s broad body and straightforward construction made it perfect for warm, flowing guitar solos, but Taylor defied convention by using it in his own way.

It is not unexpected that James Taylor was drawn to the Fender Telecaster because it was a breakthrough instrument in the acoustic world. Since this is the first electric guitar built with a solid body, it stands to reason that James has used this guitar for years. Taylor must have also admired this Telecaster’s bolt-on neck and maple contoured body. On the front of the guitar, you can typically find 2 volume and two tone control knobs on the Telecaster.

The Fender Tele Jr. is a Telecaster variation that Taylor would still have approved of. Due to their rarity, only 100 of these units were made available in the 1990s. This edition includes every element that makes a Telecaster a Telecaster, including the typical Telecaster body form, electronics control, and scale length.

What was James Taylor’s technique for playing the guitar?

Only half of the battle is won by the guitar’s tone. The sound of an acoustic guitar is significantly influenced by how it is played. Taylor has stated that he does not enjoy using finger picks and prefers to use his thumb and fingernails instead.

This indicates that his sound is more distinct than using the pads of your fingertips, yet less harsh than a plastic pick. Additionally, it provides him more control over how loud or quiet each string plays, resulting in a clear, brilliant, and soothing sound from his guitar.

What other artist played Gibson J-50?

Many different musicians used the J-45 and J-50 guitars, which were immensely popular. The guitar was initially designed to be a reasonably priced choice for intermediate musicians. As soon as larger players began to take notice, the quality outpaced this demographic.

Elvis Presley and Buddy Holly have both utilized the J-45 going all the way back to the beginning of rock and roll. Bob Dylan, John Lennon, and Bruce Springsteen all took it up after those players passed away.

What guitars did Taylor play?

So there you have it: you now have a historically accurate and growing list of the guitar types that James Taylor has been using over the years. His most famous album, Sweet Baby James, Gorilla, and Never Die Young, are the best of his career.

To recap, the guitars James Taylor has been using all throughout his decades of musical career are the Epiphone Sorrento, the Gibson J-50, the Fender Telecaster, and the Signature Model guitars named after him.

Please feel free to share any guitar names or brands that we missed including in this list. And if any of your friends who are also James Taylor fans are interested in learning more about the guitars he has been using to perfect his skills, then feel free to forward them this page so they may learn what kind of guitar James Taylor plays.