If you have a great passion for electric guitars, you must have noticed that there exist different types of guitars and the terminology for them differs as well.

Every single one of them plays a hand in shaping a guitarist’s sound before you hear it. When choosing a guitar, you should always make sure that you know what sound you are going for. This will allow you to pick out the best guitar that suits your needs.

In this article, we’ll tell you in detail why all electric guitars sound different. 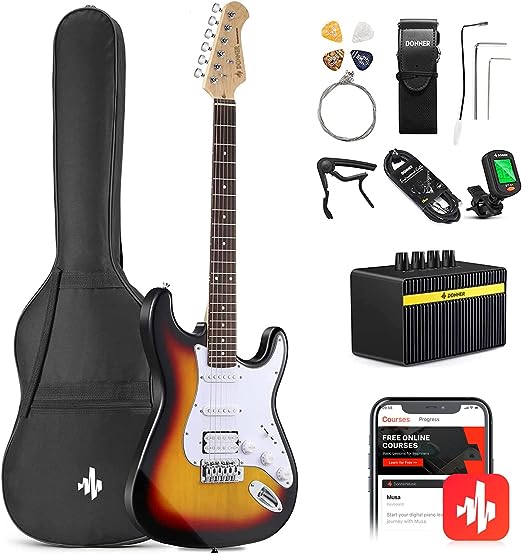 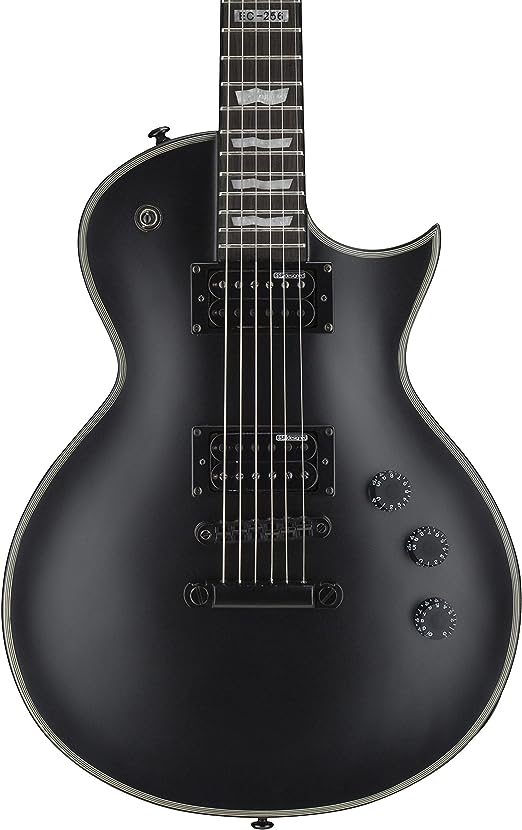 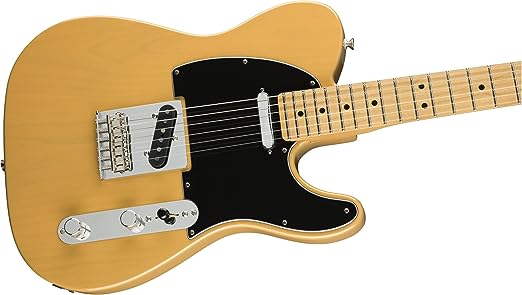 One of the first things to take into consideration while choosing an electric guitar is the material it’s made of. A guitar is usually made up of several kinds of wood.

Tonewoods are the woods used in the construction of your guitar’s body and neck. A general rule of thumb for guitar wood is that the firmer the wood, the brighter the tone, and the softer the wood, the darker the sound.

When it comes to the types of woods, we usually have Alder, maple, rosewood, mahogany, and ebony

Alder is a hardwood, and it’s very versatile. It’s a very good wood for guitars, and it has a bright sound. It’s used in many acoustic guitars as well. Alder bodies are used in a variety of different styles of electric guitars. Fender guitars feature Alder bodies, as do many other brands.

Maple is a very common wood for guitar bodies. It’s a very versatile wood, and it’s very bright. Maple is a good choice for guitars with a bright sound.

Rosewood is a dark tonewood. It’s very dense and it has a distinctive dark tone. Rosewood is a good choice for guitars with a dark sound. It’s a popular fretboard wood that produces thick lows and warm mids. Rosewood fretboards can be found on many of Jimi Hendrix’s later guitars. This blend works well with a wide range of guitar genres.

Mahogany has a rich, well-balanced tone. Nothing from the highs, mids, or lows is missed, but nothing sticks out either. Mahogany is a powerful and neutral wood. Mahogany is used to make the majority of single-cut guitars.

Fender’s other favorite is Ash. Ash guitars will have less bite in the midrange but will have a great twang and long sustain. Swamp and northern ashes are the two sorts of ashes. Swamp ash is a softer wood with a warmer tonal range. Northern ash, which has a brilliant, singing high sound, is also used.

Usually, the Woods for the body and neck are frequently chosen for their compatibility. Alder is a terrific wood for highlighting a guitar’s midrange, but it needs to be combined with a harder, more dense wood, like maple to bring out the guitar’s full dynamic range.

Alder is a versatile guitar wood with a wide dynamic range that may be used in almost any genre. The bodies of Fender guitars are typically composed of alder, with maple necks and either a maple or rosewood fingerboard.

Les Paul’s guitars have a distinctly dark tone. Gibson employs maple to balance out mahogany in the same way that Fender does with Alder. To bring the guitar’s brilliance out, Les Pauls have a slab of maple on top of their mahogany bodies.

A single-coil pickup generates a smoother sound with a more pronounced high end than a dual-coil pickup.  It will also have a lower output level than the dual coil.

Two coils of wire are coiled in opposite directions around one or more magnets in a dual or humbucking pickup. One rotates in a clockwise motion, while the other rotates counterclockwise.

For example, the size of your strings affects the pitch of your notes. The bigger the diameter of the string, the higher the pitch. Smaller strings produce lower pitches. Using thicker strings has the disadvantage of making your guitar more difficult to play.

Some electric guitars have strings made up of nickel which ensures that they retain their malleability and playability. Most electric guitar strings are made of steel, and the thicker strings are crafted by winding the second string around an initial string.

In addition, there are strings that are flatwound or roundwound. These strings are thinner than normal strings, but they produce a darker, fuller sound.

One of the crucial factors in shaping the guitar’s sound is the type of amp being used.

As playing guitar through a half stack gives you different tones than playing through a Twin Reverb.

It’s the same with amplifiers. Depending on the type of amplifier you own, you’ll use it to suit different applications.

Many guitarists will use a smaller combo amplifier that doesn’t require as much volume if they’re playing blues, jazz, or other genres that don’t require a lot of distortion.

Metal guitar music is usually in the form of half- or full-stack. You’ll notice a half stack or full-stack if you’re playing metal to get the highest output associated with the genre.

The body type of your guitar plays an instrumental role in determining the characteristics of the guitar.

These guitars are made up of a single piece of wood.  These guitars have more sustain and a brighter tone than a hollow-body guitar. In comparison to semi-hollow or hollow bodies, they are more resistant to feedback. As a result, they’re ideal for genres with more distortion, such as rock and metal.

Semi-hollow guitars are made of wood or plastic and have two F-holes on the top of the guitar’s body. Two wooden blocks then run down the inner chamber and divide it into two. The perfect example of this kind of guitar would be a Gibson ES-335.

Semi-hollow guitars are used by many rock musicians and are a good alternative to a solid guitar. It’s true that semi-hollow guitars don’t have solid wood sides, which makes them susceptible to feedback when played at loud volumes, but they are still a very nice guitar to own.

When talking about the tone of semi-hollow guitars, they are very similar to a solid body guitar. Though very subtle, they have a slight representation of an almost acoustic guitar’s tone.

Hollow body guitars don’t have a block of wood in the middle. In brief, they are guitars that have no solid wood core but rather a hollow cavity in the body.

They also produce high feedback, which makes them unsuitable for genres that require a lot of gains.

Jazz musicians and blues players often use hollow-body guitars. However, they can be used in many other styles as well.

The body, shape, and material of the guitars play a major role in giving sound to the guitars. However, there are other factors as well. These are the electrical components of the guitar.

Potentiometers are commonly referred to as “pots.” In an electric guitar, pots are used to control a range of functions. Typically, they are used as tone and volume controls. However, it can also be used to combine two pickups, attenuate one coil of a humbucker, and so forth.

Capacitors, often known as caps, have a variety of applications. Their most typical application is in the tone control, where they form a low pass filter with the pots. All frequencies over the configurable cut-off frequency are shorted to the ground by this filter.

In this section, we will add a few FAQs to clear your mind further.

Is Electric Guitar Easier to play Than Acoustic?

Does painting an electric guitar change the sound?

Painting or coloring does not change the sound of the electric guitar. This is because the pickups are the part of the guitar that produces the sound. So even when you paint it, the guitar sound will still be the same.

What is the cost of an electric guitar?

You can buy an electric guitar for as low as $200. The price ranges from $300 to $1000 depending on the features, brand, and quality. However, if you really want to get one, the best option would be to go for the good brand as it offers comparatively better features, an audible sound, performance, and last longer. Learning and even practicing becomes easier with a better quality instrument.

What’s the most popular electric guitar?

The most popular electric guitar of all time is the Fender Telecaster. The reason behind this is that this guitar is known for its quality, durability, and versatility. It is the best-selling electric guitar in the world.

The Telecaster is noted for its ability to create both a bright, rich cutting tone (the classic Telecaster country twang) and a mellow, warm tone, depending on the pickup selected.

In conclusion, it can be said that various factors determine the sound of electric guitars. The tonewood, string type, body type, pickup type, and amplifier of your guitar can all make a difference.

While going for the electric guitar that suits all your requirements, it’s necessary to consider the combination that will yield the best results. For example, Fender Telecaster offers a solid body, maple neck, rosewoods fretboard, and two single-coil pickups. All these features ensure a perfect combination of tonal quality and playability.

The good news is that you can find a variety of electric guitars in the market that can satisfy your needs. You just have to choose the one that suits your needs and preferences.

In addition, it’s also necessary to think about who is playing the guitar. There are many different guitar players around, and they all play their guitars differently.