Want to be a pro musician? But don’t know how to Connect Rock Band Drums to PS4? If yes, continue reading, and you will get the answer to your question. We have covered your query in detail, and you just have to give it three to five minutes.

No problem, the American entertainment company Harmonix published a music video game that allowed players to enjoy music simulation across many different genres and of different decades. The game work on the PlayStation and Xbox.

Mad Catz is the company that also developed the new instrument controllers for the marketed and distributed game. This game enabled the player to enjoy the improvisation in their guitar and drum skills by including freestyle solos for the drummers.

This game offered a higher degree of freedom provided by the help of freestyle play, backward compatibility, and innovative features of the game.

The gameplay follows the procedure that allows the players or group of players to use specific instrument-based controllers which mimic the playing tool with the help of following cues on the screen.

The game is easily connectable with PS4 and convenient to be connected via Bluetooth or by dongles if we have an old simulator guitar or drum.

The game mode is a quick play that allows players to play any song on the disc or any other downloadable music. It also has the option for you to enjoy the simulation of a guitarist or drummer as it is a role-playing game.

The other option is freestyle solos which is an optional feature to hit the solo notes of the song more precisely. 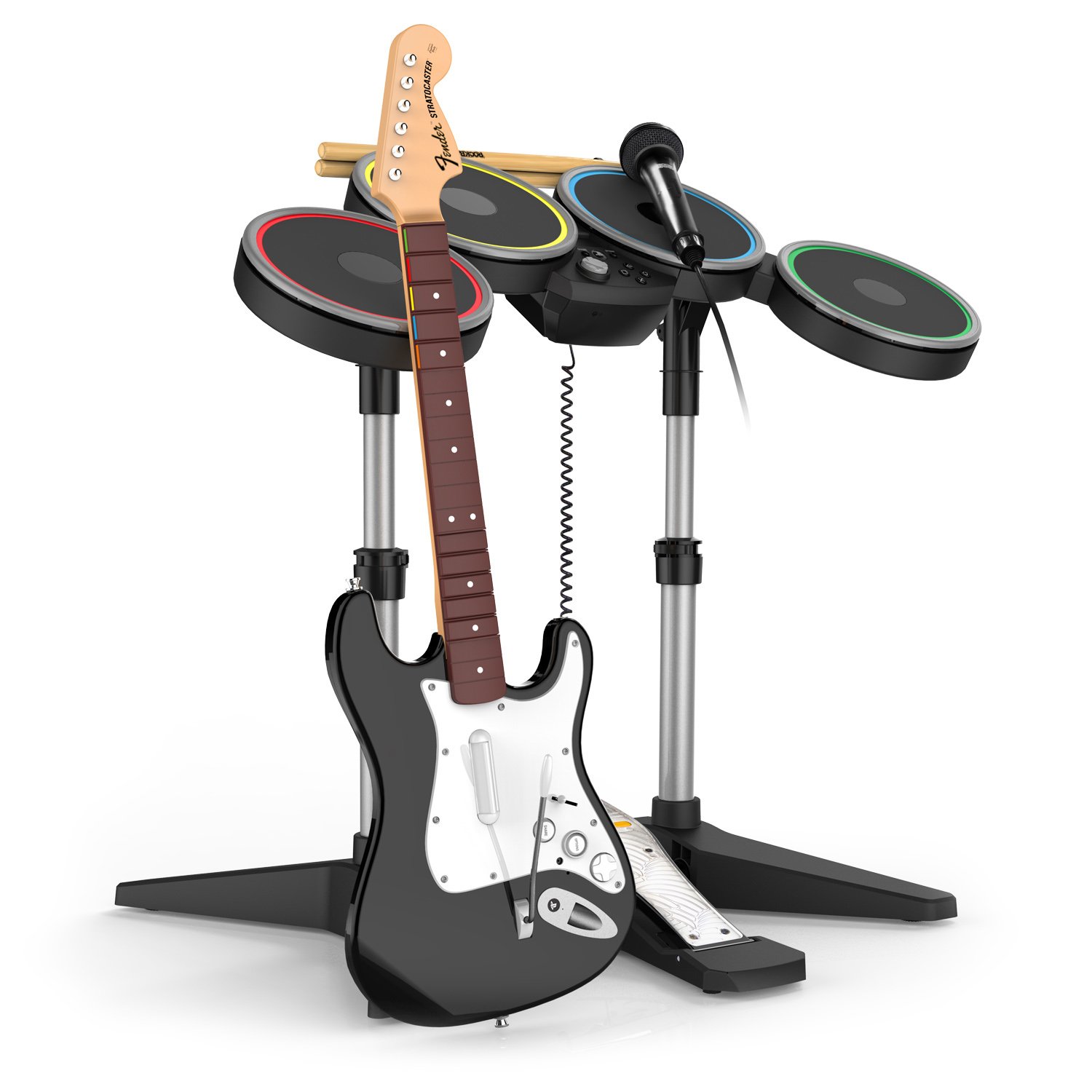 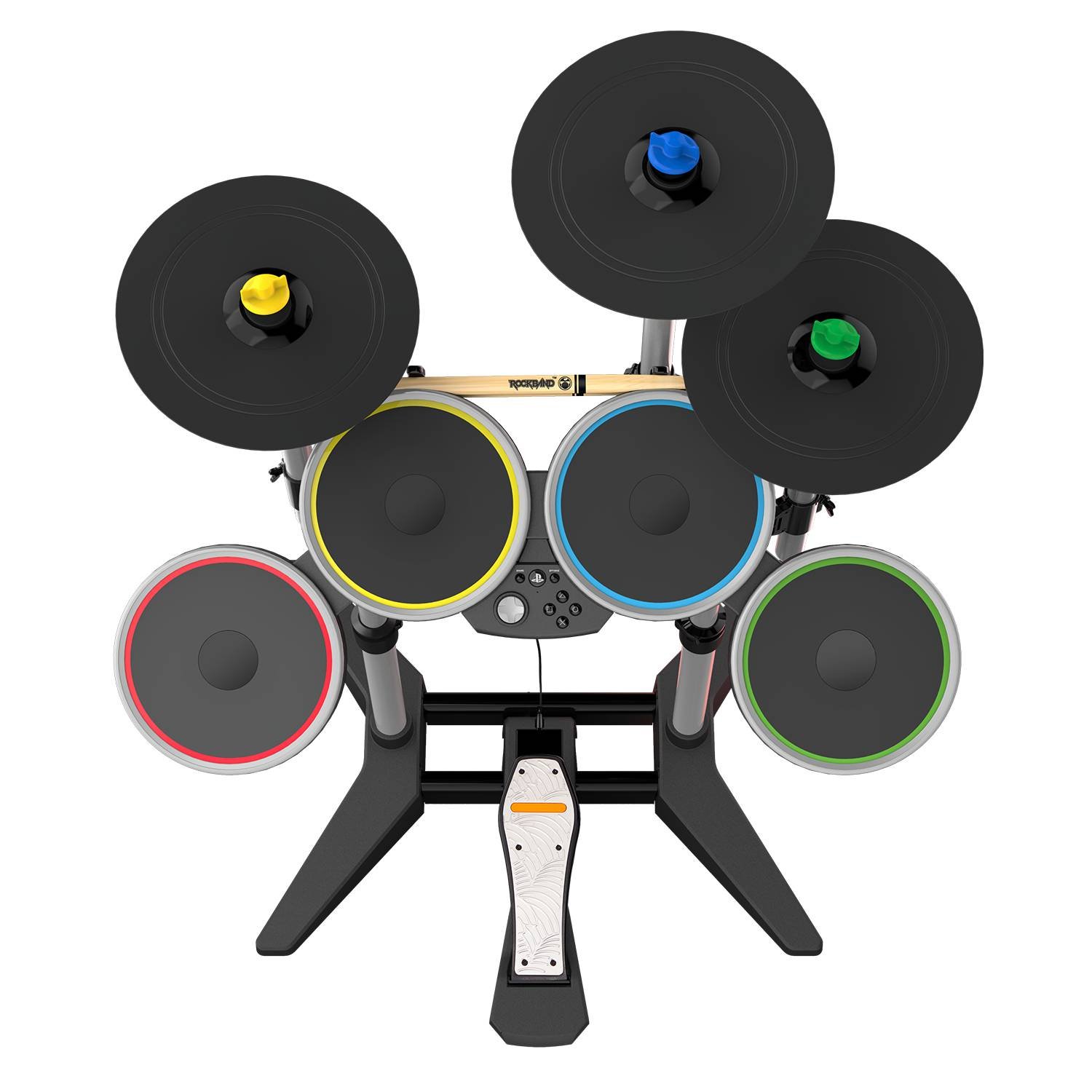 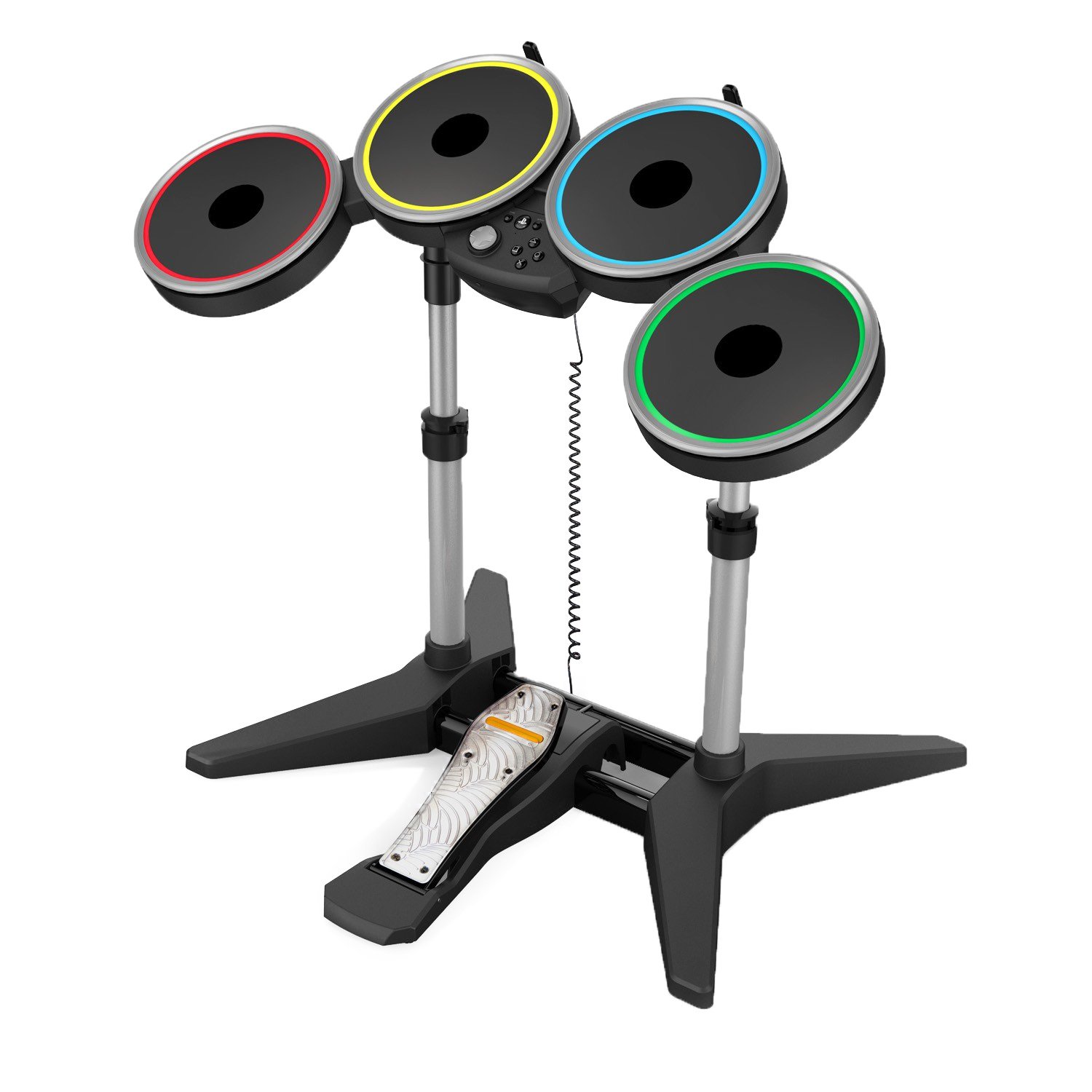 Rock Band Rivals Band Kit
9.1/10
Check Price
TABLE OF CONTENTS show
Gameplay
The Advancement of Controllers
Why Play This Game?
Cost for Game and Controllers
How to Connect the Rock Band with PS4?
Does Rockband PS4 Need Dongle?
Will Rock Band 3 Drums Work on PS4?
Final Words of How to Connect Rockband Drums to ps4

It attempts to play through the song played on the screen and score points. On hitting successful notes without making mistakes, players earn a scoring multiplier.

In contrast, failure to do this can penalize the player by decreasing its performance, ending the song prematurely. The rating system is based on five stars; playing on higher levels can earn the player gold stars.

The Advancement of Controllers

The Harmonix Company worked so hard and aggressively with console manufacturers. The purpose was to allow drum and guitar players to be forward compatible with the new updated Rock Band series.

This compatibility was compulsory to support the Rock band using community. Suppose you had just started playing and want to be a guitarist or a drummer for fun purposes or pursue your career as a professional musician.

Why Play This Game?

The controllers, which are the instruments, can be connected with the PlayStation4 via Bluetooth, making it more user-friendly and convenient. These rhythm games had been so popular in the past decade—games like these provide core gameplay, multiplayer options, freestyles solos, backward compatibility.

Cost for Game and Controllers

Invest $60.00 to buy the game either online or from any nearest game store. The standard and 4-in-one-bundle are available for online purchase from many online and retail vendors. The console of the game costs $139.00 approx.

How to Connect the Rock Band with PS4?

Many players are doubtful how to connect Rock Band drums to PS4. The process of this is simple and includes the following steps to connect.

Synch the instrument you play, which can be your guitar or drum, with the provided Bluetooth system in your PS4.

Switch on the PlayStation4 and move to the main menu. Batteries of the synched controllers are to be ensured.

With the help of the main menu of the PS4, move to Settings, Devices, and then Bluetooth. Locate the PlayStation button on your instrument. Press and hold it.

The controller can be found near the d-pads of your guitar. The symbol of PlayStation will light up with a blue light. It will start blinking slowly. This is the sign that the controller is ready to be synched.

The wireless button on the controller is to be pressed. Hold it for 1 to 2 seconds. You will find your controller now blinking with red or blue light simultaneously.

Search for your controller in the list of Bluetooth devices displayed on your PlayStation. Choose “Yes” if the wizard appears with a question – Do you want to connect to a controller?

If you’re going to join your Rock Band, it is compulsory to assign your controller with a profile, or else it won’t synch.

After a few seconds, the alternating red-blue light will change into steady blue light after completing the steps. It is a sure sign that your controller is connected and successfully synched with the console!

No, the clear answer to this is we don’t need a dongle to connect our playing instrument with the latest PS4 with dongle help. This is because the new devices compatible with PS4 are wireless.

You can connect them via Bluetooth. Just follow some simple steps. Connect the console with the PS4 and enjoy!!

Yes, the Rock Band 3 drums will work on PS4. But with some modifications, the dongles are the main thing that will help us play the rock band three drums on PS4. We need to change the dongles that are specified for the PS4.

They are available on amazon with different offered prices. PS4 works with dual shock dongles, which help to start the game or navigate the store. It will take three batteries rather than two batteries.

Final Words of How to Connect Rockband Drums to ps4

Well! That’s all about how to connect Rock Band drums to PS4. The game designed and defined by Harmonix is a platform that can be updated after regular intervals, making it more user-friendly and exciting for the players.

The game is a hallmark of advancement in educational, scientific, and entertainment fields. The rockband is easy to connect with PlayStation4.

Then this simulation game can be the best source for you to start enjoying and learning the lessons simultaneously. All you need is to be passionate.

So, why wait and lose such a best viable option of learning and making your dreams come true with fun and learning together.

Get yourself one as soon as possible if you want to be good at playing songful and melodious tracks of different genres and amaze the people around you or on the stage in front of a crowd. The future waits for you.

All the thanks to Harmonix for this creative and simulation game.